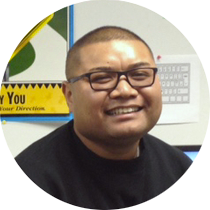 David Hol doesn’t think he is a success story. “The story is still being told” he said. David, 25, is the son of Cambodian immigrants who came to the United States in the late 1970’s. In foster care or under state supervision from the age of five until his eighteenth birthday, his early life was a struggle. “My last foster family was the best, but I dropped out of high school.”

David didn’t give up on himself after he dropped out.  He started looking for work to support himself and help others. He found his first summer job through the GLWIB and Career Center of Lowell Summer Jobs Program. Working with younger kids at the Boys & Girls Club or cleaning up the city for the Parks and Recreation Department, he learned the meaning of hard work and earning a paycheck.

Career Center staff stepped into David’s life, suggesting that he get his GED. Funded by the Workforce Investment Act and in partnership with the United Teen Equality Center (UTEC), he started studying for his diploma and developed skills in multimedia, culinary arts and maintenance. He left UTEC after he tried and failed several times to pass the math portion of the GED. However, Career Center Staff didn’t give up on him.

David “was grateful for a chance to prove myself” and with the assistance of Middlesex Community College and UTEC he was individually tutored in math and received his GED. He was reenergized. He reengaged with the Career Center and began receiving assistance for additional job opportunities and education from the Safe and Successful Youth Initiative, a new effort at the time from Governor Deval Patrick’s office.

David enrolled in classes at Middlesex Community College, becoming one of the first members of his family to go to college, and began a subsidized job with the City of Lowell’s Maintenance Department. When a full-time unsubsidized job with the Public Works Department opened up, he was encouraged to apply and was hired. Although the job was temporary, he learned new skills operating machinery and was well liked by his coworkers and supervisor. Two semesters on the Dean’s List at Middlesex opened his mind to furthering his education.

Always wanting to meet new people and calling himself an “adventurer,” David was accepted to Salem State University and begins his first semester later this month. With the help of the Career Center, the college, coworkers and others, he was able “to help myself, with people behind me, rooting for me.”

David said he hopes to one day move someplace warm, like Arizona or Texas, to build his own home and raise a family; adding another chapter to his success story.

View other success stories that took place right here in the Greater Lowell area. Will you be the next success story?